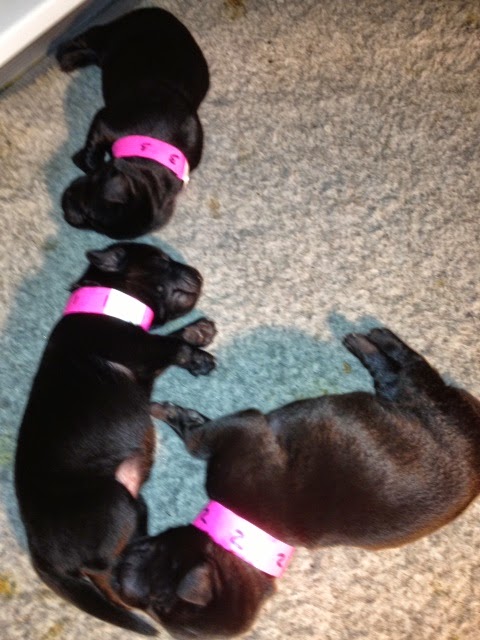 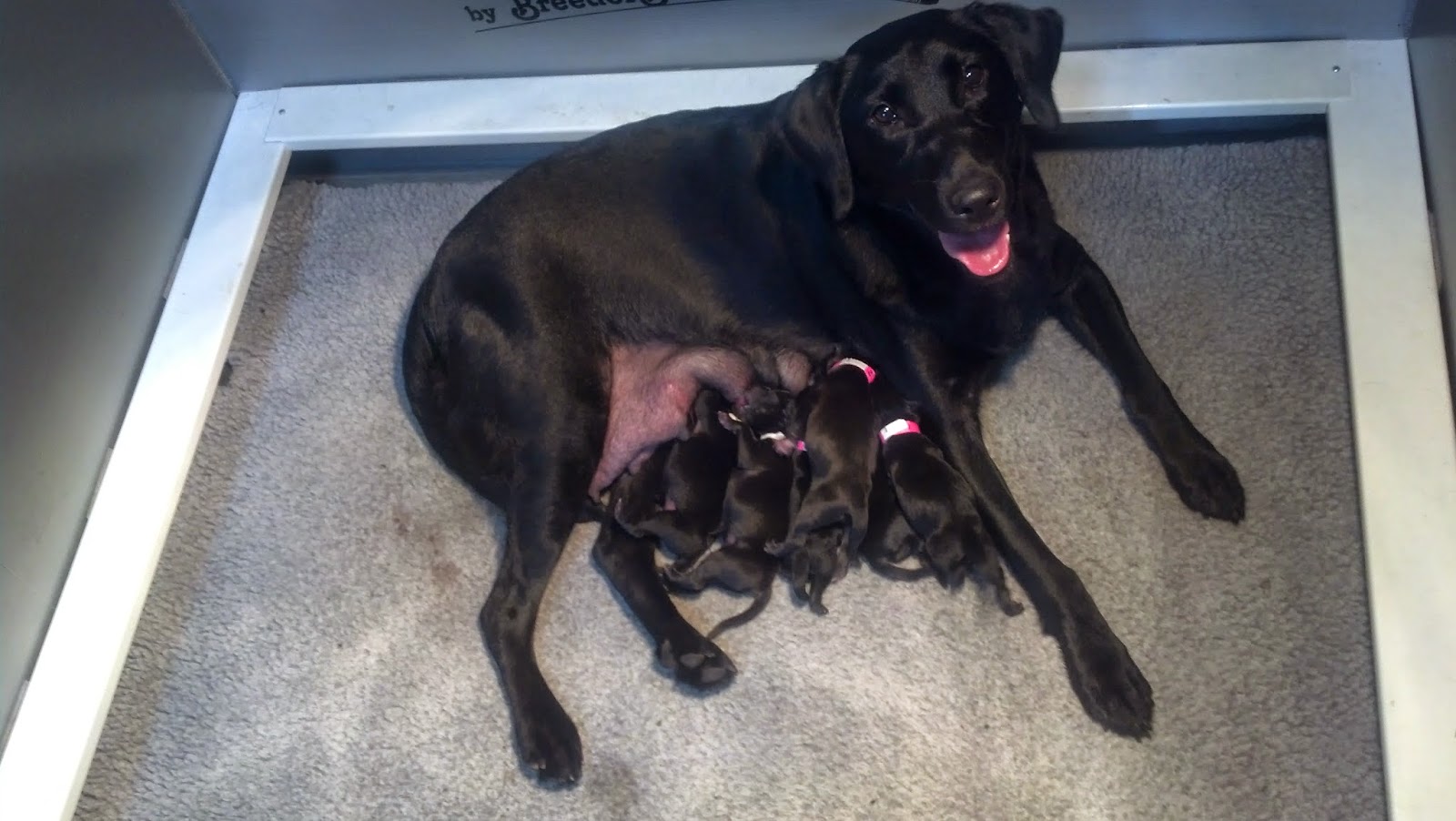 Our Dam Honey
(Our Sweet Honey of Silverbrook JH)
and Sire Rev(FC AFC Rev Blu Genes)
had a litter of puppies March 21,2014


All 6 puppies and momma are doing well!

Stormy and Nelly had 5 beautiful puppies on Sunday Feb. the 2nd. 3 black female, 1 yellow female and 1 black male. All of the puppies and mama are healthy and doing well. You can follow their adventure at
nellieandstormy.blogspot.com
Posted by Ed, Amy, Brandon & Ryan at 10:22 AM No comments:

Our Dam Ellie had 9 beautiful healthy puppies today. There are still a few for sale. For more information call Ed at 443-480-0775. You can follow the Blog for updates on the puppies and their growth.
Posted by Ed, Amy, Brandon & Ryan at 6:37 PM No comments: 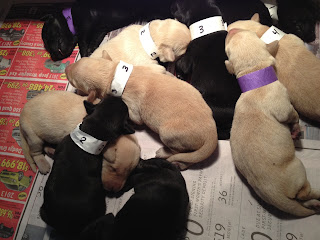 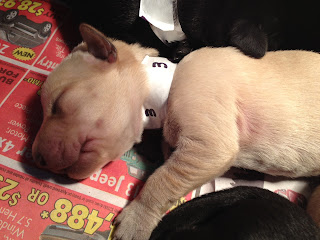 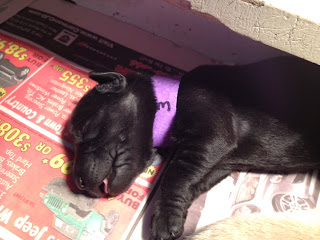 Honey had her litter of puppies today!

She nested all night long!  She pulled blankets and clothing is piles and circled around them, digging and sniffing. Honey was so miserable she, shook &  her teeth were chattering most of the night.  Honey had her first pup at 8:52 am and her last pup at 4:05 pm. Honey and her eleven puppies are resting well. 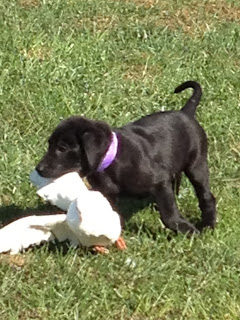 Sire: FC AFC Small Craft Advisory “Rough”
Rough has 141 All-Age points with a total of 17 all-age wins. Rough Qualified for the National Amateur Championship every year from 2005-2010. He qualified for the National Open in 2007 and 2010. Rough has one FC sibling and three QAA siblings. Several offspring have hunt test titles and others were listed on the 2010 derby list including the #5 and #9 dogs.  Several offspring are placing in derby, qualifying, and Amatuer All Age  Field Trial events in 2011.  Hips are rated Excellent, elbows normal, EIC, CNM, and CERF are clear. 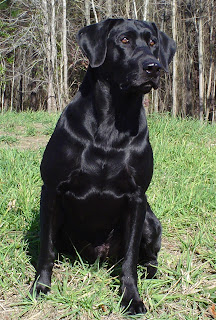 Dam: Our Sweet Honey of Silverbrook JH
Honey is a loving family pet that enjoys children and will retrieve anything thrown. She enjoys lying on the couch or at your feet while in the house but changes gears and has all the energy you desire when hunting or competing in hunt tests. Honey has been hunting geese and ducks for 4 seasons and has retrieved hundreds of birds. She participates in AKC hunt tests and received a Junior Hunter title in the fall of 2009. She took the first half of 2010 off from training and had a litter of 10 puppies. She returned to training in the late summer and is currently training at the Senior Hunter level doing multiple marks, blinds, and honoring other dogs.  She will compete in AKC Senior Level Hunt Tests following this litter. Hips are rated Good, elbows normal, EIC, CNM, and CERF are clear. 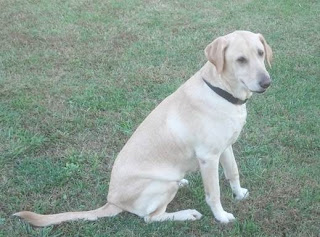 Yellow and black puppies Due in January 2013. This is a third repeat breeding. The 2010 breeding produced Lakosky’s Tank which can be seen on the television show “The Crush with Lee and Tiffany” on the Outdoor Channel and several other dogs that had successful hunting seasons and a few that will be running AKC hunt tests this year. Pups from this litter should be capable of performing well in hunt tests and field trials. They should also make outstanding hunting dogs and companions around the house. 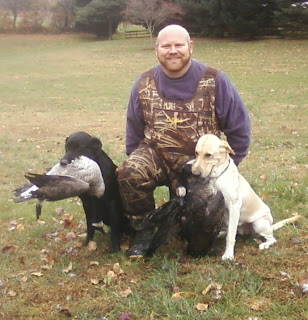 Ed, Amy, Brandon & Ryan
Welcome to Churn Creek Retrievers Blog. We are located near the town of Worton on the upper Eastern Shore of Maryland. Kent County is predominately a farming community with a combination of creeks, flat areas, and rolling hills along the Chesapeake Bay. Ed and Amy Myers and family have been raising and breeding working Labrador retrievers since 2000. All our dogs are raised and live in our house with our family. On occasions, Churn Creek Retrievers will produce puppies from well-bred titled stock that will be free of all known hereditary diseases. We strive to produce puppies that are healthy, intelligent, have energy and drive but also have calm temperaments. These puppies will possess traits that will enable them to be competitive in Field Trials and Hunt Test and still be good for hunting and family pets. 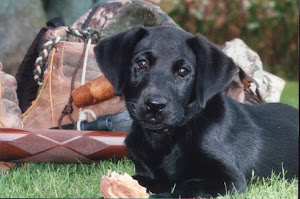